I considered calling this post afternoon chicken, because that’s when I made it. In the afternoon, while the light streamed in from my tiny door onto my tiny stove. But then, I didn’t want you to be confused, see, because you can make this chicken anytime, not just in the afternoon. You could make it in the morning, if you felt like it. Personally, I don’t have the stomach for morning chicken, being more of an oatmeal girl, but who knows. If you are a morning chicken person, you just might like this chicken in the morning. 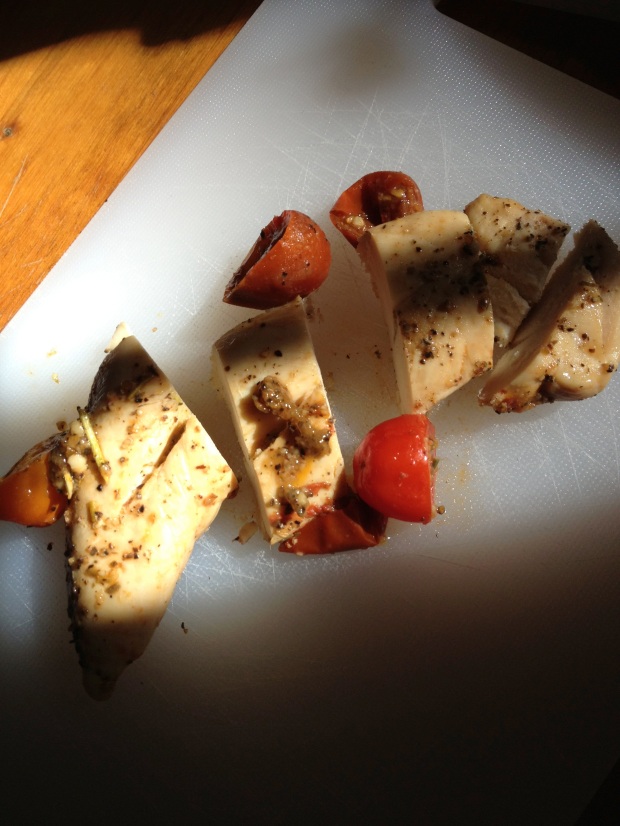 Light on chicken, a still life.

Chicken isn’t fancy. You already know this. And yet, as a bay area resident, I almost have a weird level of guilt in admitting that I periodically roast up a whole chicken or that it is my preferred protein to toss into salads. Instead of ahi tuna or mung-soaked tofu (Is that a thing? It sounds like a thing. I’m just making up pretentious food things now! Wheee!) or San Francisco bay lobster that I caught myself on my yacht – my hybrid yacht! – which runs only on ethanol and electricity, and love. Sweet hippie love.

I bought this chicken at the grocery store. And then, I put it in a pan, and I put some salt and pepper on it, and then, for fun, some fresh rosemary, and then for even more fun, some parmesan, just to see what would happen. And what happened was a delicate cheese crunch, a burst of warm rosemary flavor, and a hint of pepper that played nicely with the moistness of the chicken and the flavor of the olive oil it was seared in. Easy, rustic ingredients that everyone has on hand.

After that, I cut it up and put it on some mixed greens and added some heirloom tomatoes (which I did not get at the farmer’s market) and a toss of balsamic and some avocado. And I ate it on my deck with some amazing goat cheese, which came from a goat whom I do not know personally, and made at a farm I’ve never heard of. Though, the farm is nearby, so we can pat ourselves on the back for eating local.

You guys, I am hanging my head in shame over all this. Everything but the cheese.

Except, I’m not. Because great food is for everyone. This is something that’s been bothering a bit, because while the Bay Area is full of passionate eaters and wonderful chefs, both in restaurants and in homes, there can be a level of pretention that is completely ridiculous about food. Is it vegan? Did it come from Whole Foods? Is it organic? Did you get it at (insert Ferry Building vendor here) because otherwise I will slightly judge this food and deem it unworthy of my consumption.

I don’t ever want anyone to think that this blog (i.e., me) comes from that place, but sometimes San Francisco people get lumped into one category. If you got that organic chicken at the grocery store, or if you killed that chicken in your backyard, you can still make something delicious out of it. If you don’t live within spitting’s distance of a farmer’s market every day of the year, you can still cook! And even if you’re not the greatest cook in the world, you can still try. You don’t have to live vicariously through food blogs and cookbooks or dream of when you are advanced enough to cook ahi, or think that you can’t cook amazing dishes because you live in Nebraska and not San Francisco. Just get some chicken, don’t feel bad about it, and fire up the stove.

You can do it. I know you can!

. A few sprigs of rosemary, to taste

. S&P, preferably sea salt, if you have it, because the flavor is more dense than regular table salt

1. Heat EVOO over medium heat, until the skillet is coated and swirls in the pan.

2. Lay the chicken in the pan and season liberally with salt, pepper, parm and a sprig of rosemary

3. When the chicken begins to turn white, flip it over and season the other side.

4. Continue flipping and turning, until the chicken is cooked all the way through. The outsides should be brown and nicely crisped, but not burned. Adjust heat accordingly. I like to cook on medium high and watch it carefully, for a really nice sear, but if you’re multi-tasking, turn it down so it doesn’t burn.